And it was relocated. And hundreds of observers came to see it. And they all watched it...
Not a religious reference, but true.

The Brown Shrike (Lanius cristatus), the first for Catalonia and Spain, and the longest-distance known record from its usual breeding grounds, had been found on 31.12.2014 then on 6.1.2015 by Iain Hartley (see this blog entry on the finding). Many observers, even coming from Teruel, Girona or Barcelona, came in the immediate days after the 6th of January to attempt relocating the bird. Without luck. Despite the fuzzy photos of the original sighting, the description from Iain was good, particularly pointing out the key features of the bird, e.g. its tail structure, with the pointed shape due to the length of the central feathers.

In order to accept the record into the official national list, it is widely agreed that having at least a couple of observers, or having supporting evidence, helps to get the record homologated. It was not the case since, until the 6th of January, there had been only one author. And despite some of us fully believed the record, there were, as always, voices that arouse doubts on such an extreme rarity finding.

In the meantime, an also very rare Shrike, coming also from the far East, was only present 132 km to the south, at Almenara, Castelló: from 12 December 2014 into february 2015, an Isabelline Shrike had been overwintering in the area. So, with that in mind, Ricard Gutiérrez thought that paying a further look to the place where the Brown Shrike had been seen, was not a bad idea in the end. At least to have a walk in the spare hour they had before a scheduled meeting. And so, taking advantage of a professional visit to the Ebre delta, RG and Sergi Sales, decided to have another (the 3rd) look to the 'Brown Shrike' area on Monday 9 February 2014 afternoon. And, much to the surprise of them, some rapid heartbeat, and rushes along the river promenade, there it was!. The Brown Shrike had been relocated after 40 days of its finding. With naturalists living in the neighbourhood, within one of the best birdwatching sites of the Mediterranean, but having largely went unavoided due to the particular site off the usual places where it had been and due to its behaviour. Now acceptance and inclusion in the national list would had no problems... but... and the photo?

Besides a popular Fool's Garden song, the lemon trees in a nearby orchard had the clue of the gap in the sightings bewteen Iain Hartley sighting and the Ricard and Sergi relocation forty days later: the bird had been seen by both by the Ebro river promenade, in some gardens and trees. But, as widely agreed, that had not to be its regular core site, because it had been seen scantly by the river despite intensive search. It had to be hidden somewhere most of the time then, from time to time, it appeared by the promenade.

That was the situation during the first week of its relocation. After the 9.2.2015 sighting (Ricard  Gutiérrez, Sergi Sales) it was seen again on 10.2.2015 (Mariano Cebolla, Sofia Rivaes) again with no photos. Being Mariano a credited photographer, that was worrying. However, on 11.2 it was photographed  by the river promenade (Vicente Tamarit). And on 12.2 at the same place too (J.Ignasi Barrachina; Mariano Cebolla).

On 13.2 it was not seen in the usual place. Panic. But on 14.2 a party of over 30 observers coming from abroad and as far as Valladolid relocated the bird at Sorrapa fields, a lemon orchard by the place of the 1st sighting on 9.2 and new photos and videos could be obtained. News were featured on 13.2 at Catalan Television Tv3 (see video below) too. (Juan Sagardía, Xurxo Piñeiro, Jana Marco, Carles Martínez, Lluís Gustamante, Aleix Comas, Ferran López, Maria Cabau, José Luís Copete, Toni Alonso, José Portillo, Grabi de Jesús, Carles Durà, Mariano Cebolla, Roser Solé, Josep Tantull, Bernat Iglesias et al). On 14.2 another 30 observers relocated the bird (R.Gutiérrez, H.Arbonés, A.Somoza, M.Noguera, X.Aute, M.Cebolla, X.Idígora, M.Domingo, R.Armada, S.Rivaes et al). And it appearead again on the television and later at Catalunya radio. Good video footage was obtained too.


Video footage of the bird  from 15 Feburary 2015 © Ricard Gutiérrez

The bird was seen by the lemon orchard during the following week too and visitors from abroad as far as Burgos, Valladolid, Asturias or Ciudad Real could enjoy the sighting of this bird. One of the most mediatic of the last seasons and certainly a matter of thought on the need of trusting people, search for own birds -not simply twitches-, thorough birding and the beauty of a species hardly seen in Western Europe such as this. Now the question is... who's next? And... where?


2nd video on the bird sighting released on 16 Feburary 2015 at TV3 on Telenotícies Comarques Tarragona including original footage from Jana Marco (uncredited in this web version but having appeared on streaming tv broadcast), Mariano Cebolla photos and some testimonials, including Felipe Rosado's who had unsuccessfully come in early January for the bird and saw it that day. 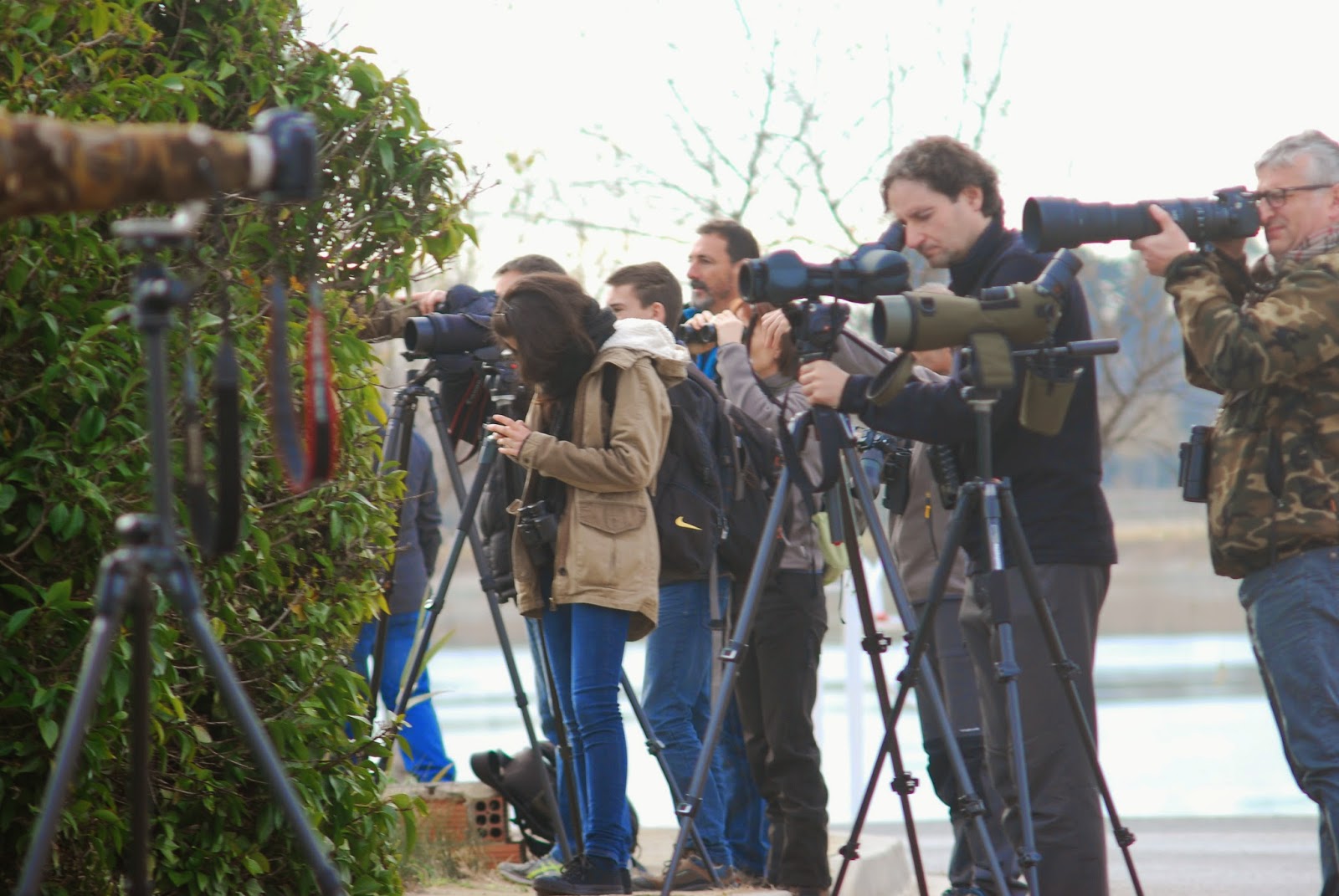 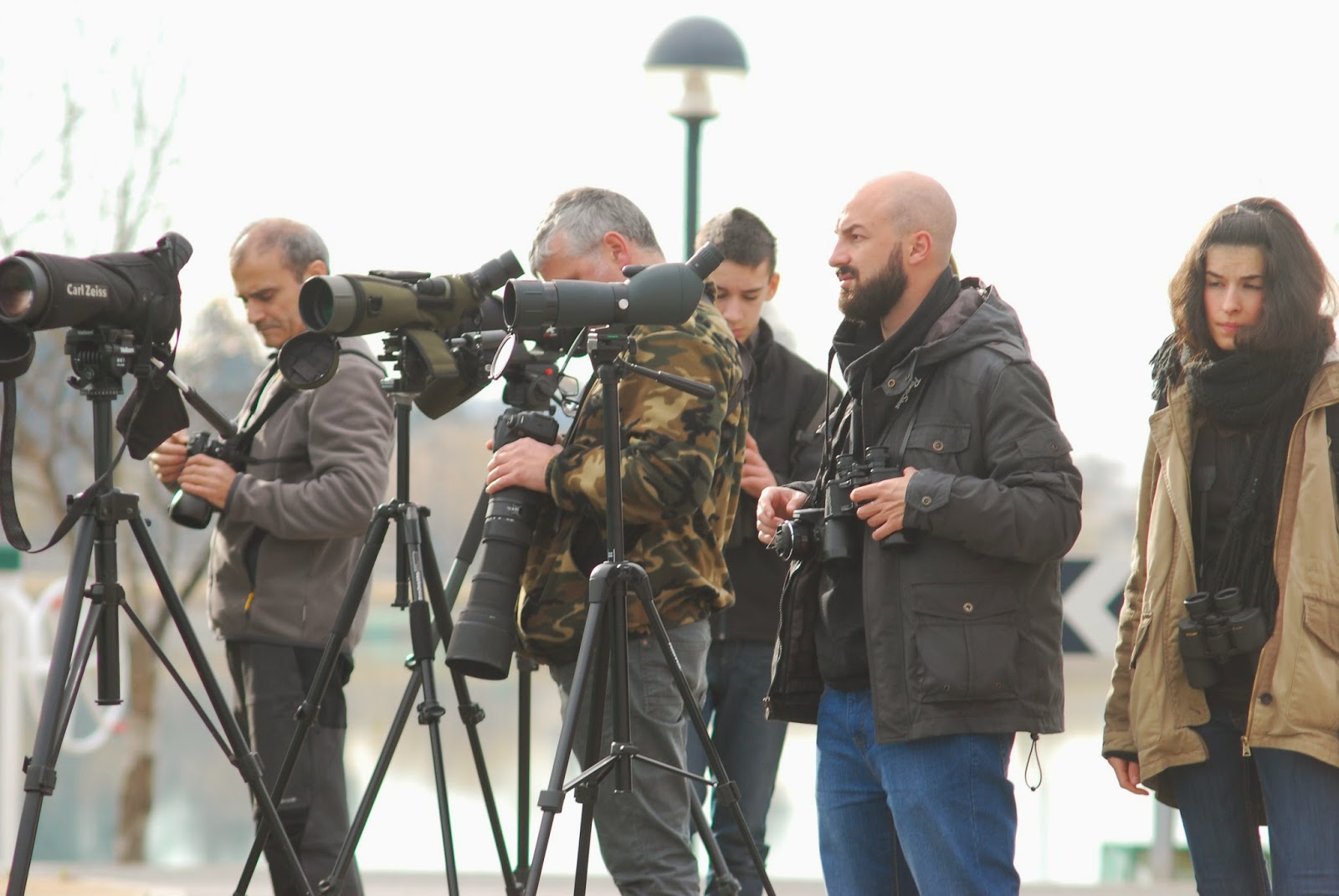 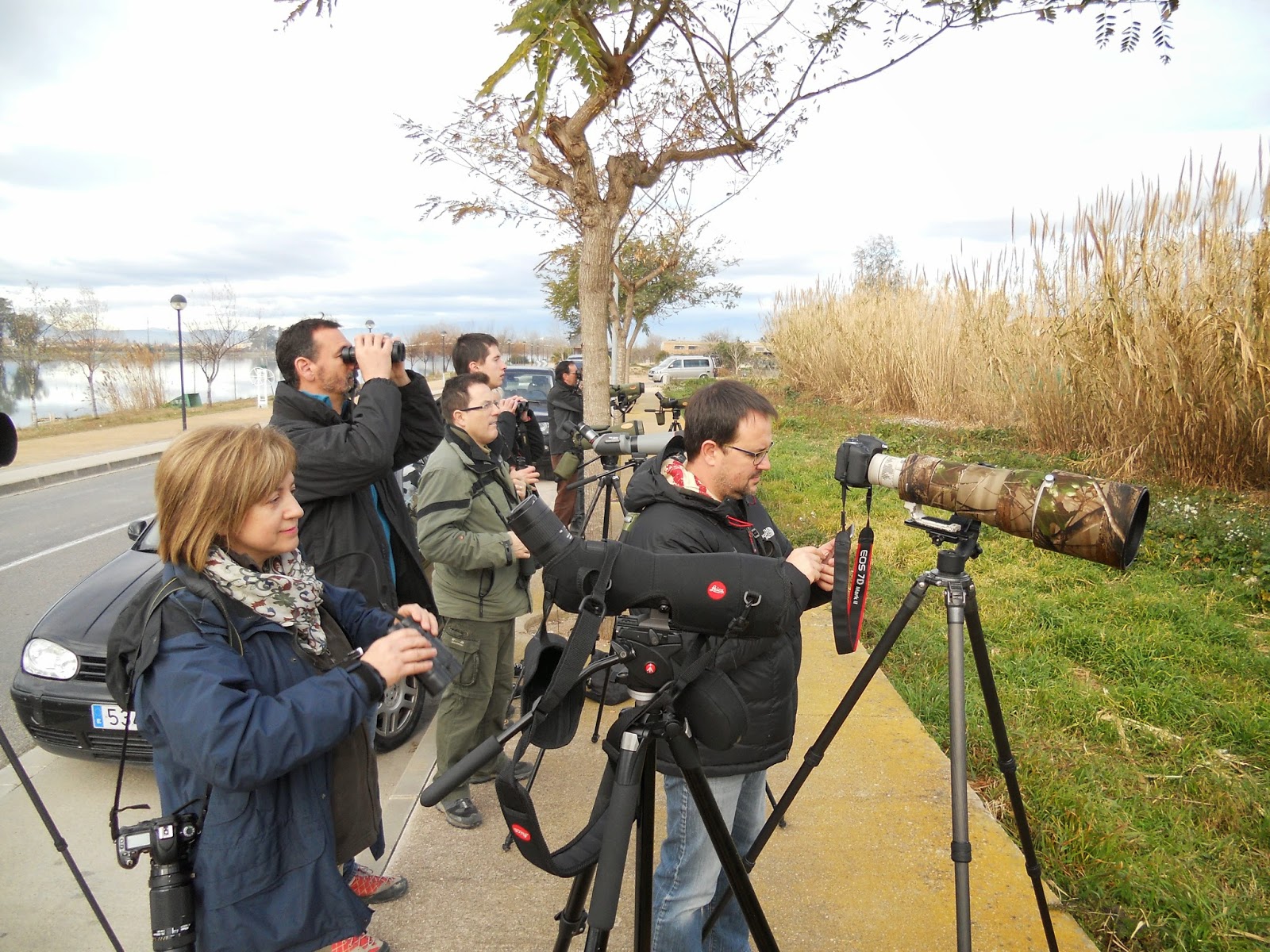 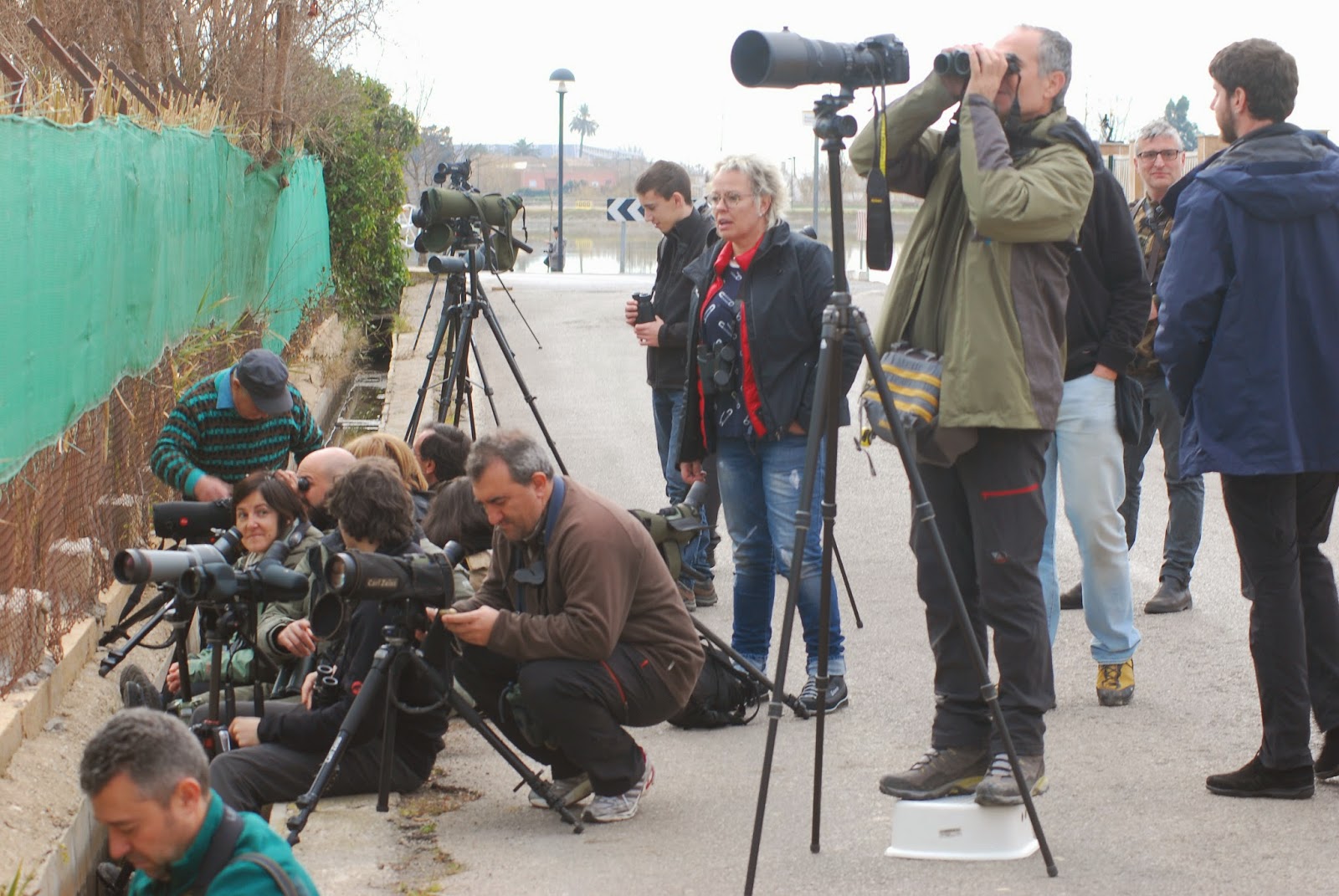 Lemon Tree song. Some of its thoughts could be subscribed by some of the birwatchers attempting the bird
1st for Spain 2015 Catalunya Delta de l'Ebre Lanius cristatus radio television twitch video videoscoping

Rosy Starling Influx in N Spain in May - June 2021 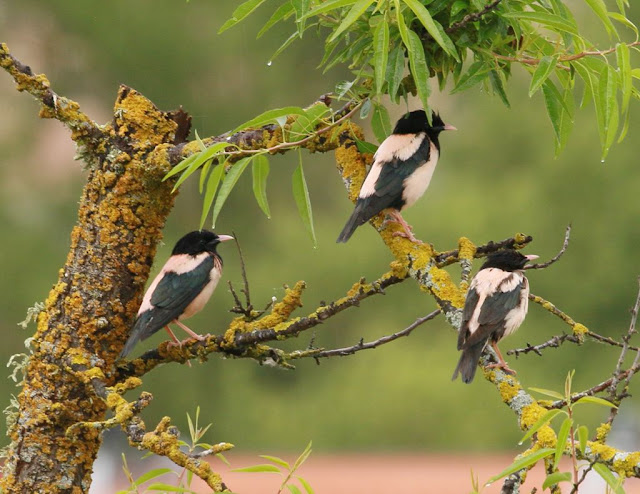 Falco amurensis, rarest of the rare 2020 in Spain 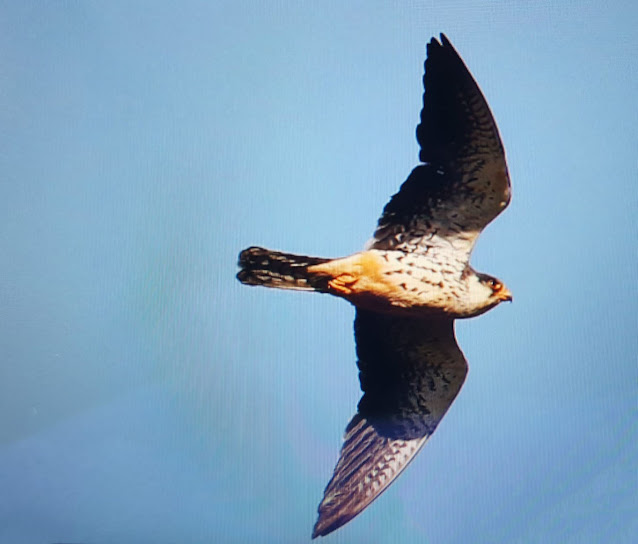 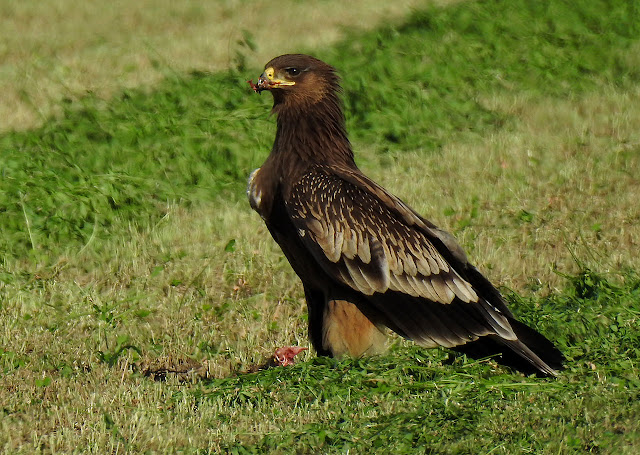 On 28 October 2020 Jacobo Ramos found a 1w Greater Spotted Eagle Clanga clanga on an alfalfa field by the road from Santa Pola to El Hondo (El Fondo), Elx, Alicante (Alacant).  The bird was seen on the ground and flying around and it was eating something as it is shown in the photos.  The same day an adult was seen while counting birds within El Hondo Park (Adrián Orihuela) but it was not the well known marked Estonian bird ' Tõnn' which, according to its satellite tag was on 31 October on its way to Spain but still in Germany (see map capture below and the online map here ).  In the last years a number of Greater Spotted Eagles and also a number of Lesser Spotted Eagles ( Clanga pomarina ) have been seen in this area in autumn and winter mostly, some to remain the whole season.   El 28.10.2020, Jacobo Ramos (fotos) encontró un primer invierno de águila moteada Clanga clanga en un campo de alfalfa de la carretera que va de Santa Pola a El Hondo, Alicante (Alacant). El ave
Leer más