A bird was seen at the suburban areas of Deltebre, Tarragona, by the river Ebre, on 6.1.2015 (Iain Hartley). The bird was seen intermitently and was elusive. Many local birders visited the area until 10.1.2015 without further relocation of the bird. Until 9.2.2015 (see below).

After contacting the observer, Iain supplied a full account of the observation included below plus record shots of the bird in the bushes which show a bird which looks like a medium sized shrike. 1st contact was made on 31.12.2014. Iain Hartley account as follows with our capitals or bolds:


Since there don't seem to have been any further records, I thought I should contact you around the circumstances of the finding of the brown shrike in Deltebre and explain why I was not able to release the news sooner.

On 31st December, I went for a short walk along the River Ebre from my wife's family house. I was returning home when I saw the shrike. It was a real surprise to see one in December, and as I got closer it was pretty clear that it didn't look like a standard red-backed.

The bird was very dark with an extremely well-marked head. I saw watched it about two minutes as it moved between the bare trees in the small fields, seeing it mainly from behind and from the side. The bird then strangely disappeared in a really open area, and despite a lot of searching that afternoon and over the next few days it could not be relocated.

I sent my brief description to friends in the UK who agreed that it sounded like a brown shrike but that I certainly didn't have enough for the record to be accepted, even if it wasn't a first for Spain. Basically, all I had was a dark brown shrike, which appeared very long-tailed with a striking black face mask including black lores and a strong white supercilium.

I tried to pass my description on the Natural Park staff but everyone was on holiday and I started to doubt what I'd seen. We don't bird in such bright light in the UK very often, so I started to wonder if it could have been an incredibly well marked red-backed, did it really have such a black mask, were the lores really black, was there really a clean white supercilium, was there no white in the wing, and no red in the tail etc (i.e. it wasn't Turkestan shrike).

After searching for over 15 hours over the next 5 days of so (all the time available between family commitments), I'd given up hope of seeing the bird again, when it reappeared on the 6th. This time it was really weary, always pearching within the trees rather than on top and often perching in the densest areas low down. However, it came out intermittently and on a couple of occassions caught large insects under the trees, taking its time to consuming them on the ground out in the open, out of the shade, and at a distance of about 10-12 metres.

I was able to confirm the features that I thought I'd seen before. The strong black mask, which thinned a little between the eye and bill but the lores were black. The supercilium was even more striking then I'd noticed before and the border between the dark brown cap and the supercilium was very distinct (i.e. not diffuse). The bird was a smooth dark brown above, with little contrast. In one view the lower nape looked very slightly greyer than the cap and back, but this was very subtle, and the tail looked dark with just a hint of brighter brown at the base and on the rump.

I managed to see other aspects of the bird that weren't clear on the first viewing. Looking at the wing I could see no white on the primaries but the edges to the coverts and secondaries were pale giving a weak wing bar and wing panel. The edges of the tertials were white and quite bright against the darkness of the bird. The tail again appeared very long, and even while perched the fact that the outer feathers were considerably shorter than the central tail feathers could be seen.

Importantly, for sexing/aging the bird, I saw the underparts well this time. On the belly and flanks, the bird was a warm buff colour with fine, brown vermiculations on the flanks. This indicated that the bird was not an adult male. I think that together with the strength of the head markings, as well as the general colouring and shape of the bird that this eliminates Turkestan shrike.

I don't have much access to the internet when at my wife's house and as it was our last day I had to spend a lot of time saying goodbye to family and friends. Between these visits I spent the rest of the afternoon trying to get a photo, but I'm afraid the bird could not be relocated and all my attempts from the morning are useless for ID; very fuzzy photos of a brown bird behind lots of branches. I was not able to put the news out properly until the evening.

I was really hoping that someone else would see the bird and get a photo but it sounds like that hasn't been possible so far, although because the bird can be so elusive, I think there is a chance it could still be present. However, I thought I should at least send a few more details about the bird at this stage, if only to maybe persuade someone to have one more look.


After asking from the record shots, Iain sends the photos in which a bird in the bushes can be seen.

Attached are the photos. Perhaps I wasn't clear just how terrible these actually are... We have a lot of presents to take with us to Catalonia at this time of year so I didn't have access to my DSLR and the small camera I had has a rubbish zoom and could not deal with the sun/shade. With the bird spending most of it's time partially hidden and in the shade, the photos are awful. 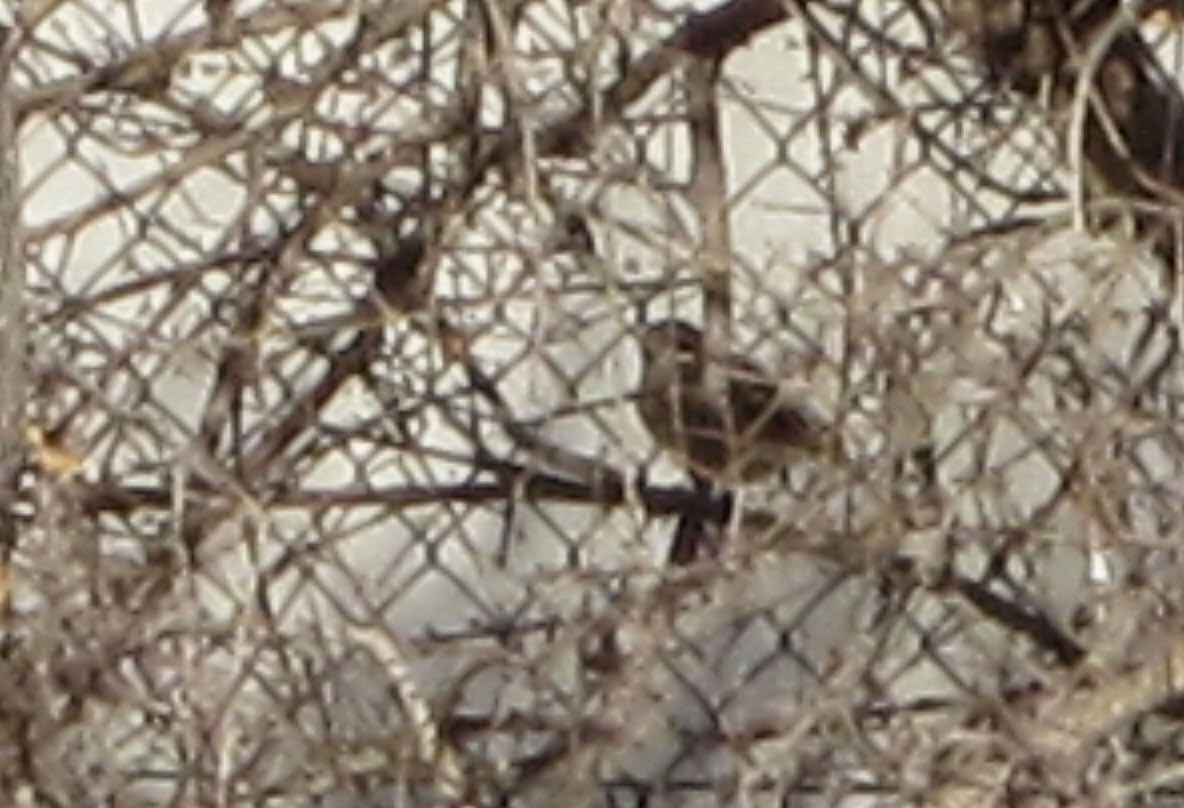 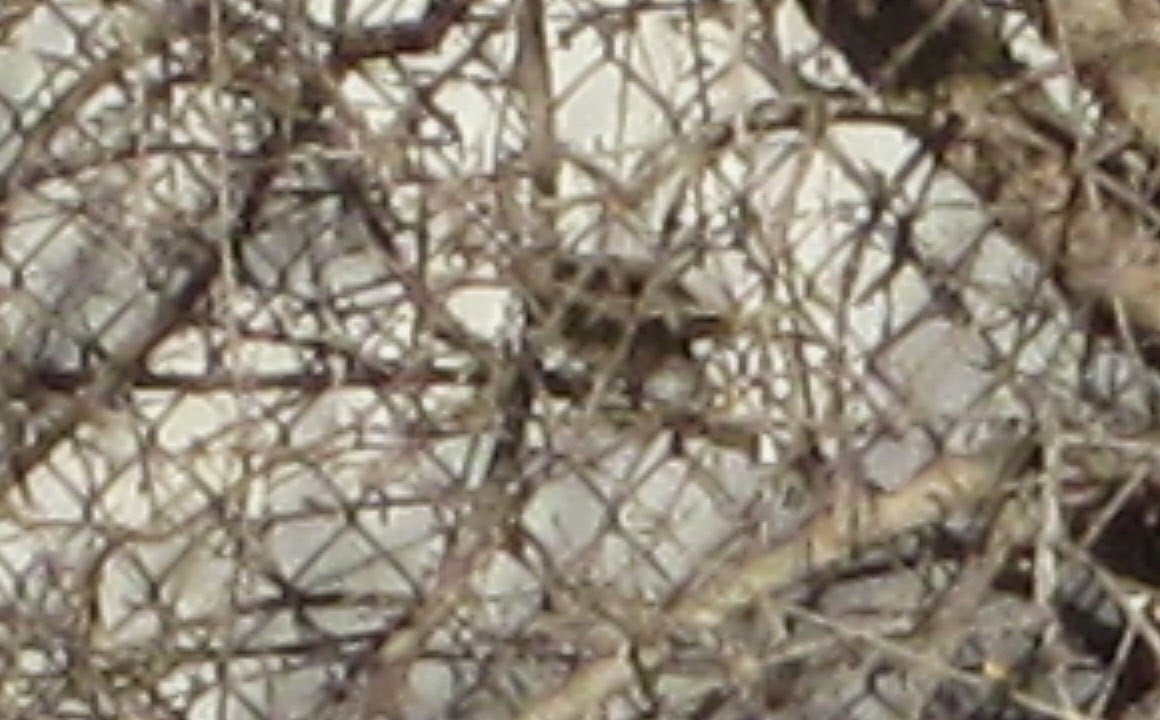 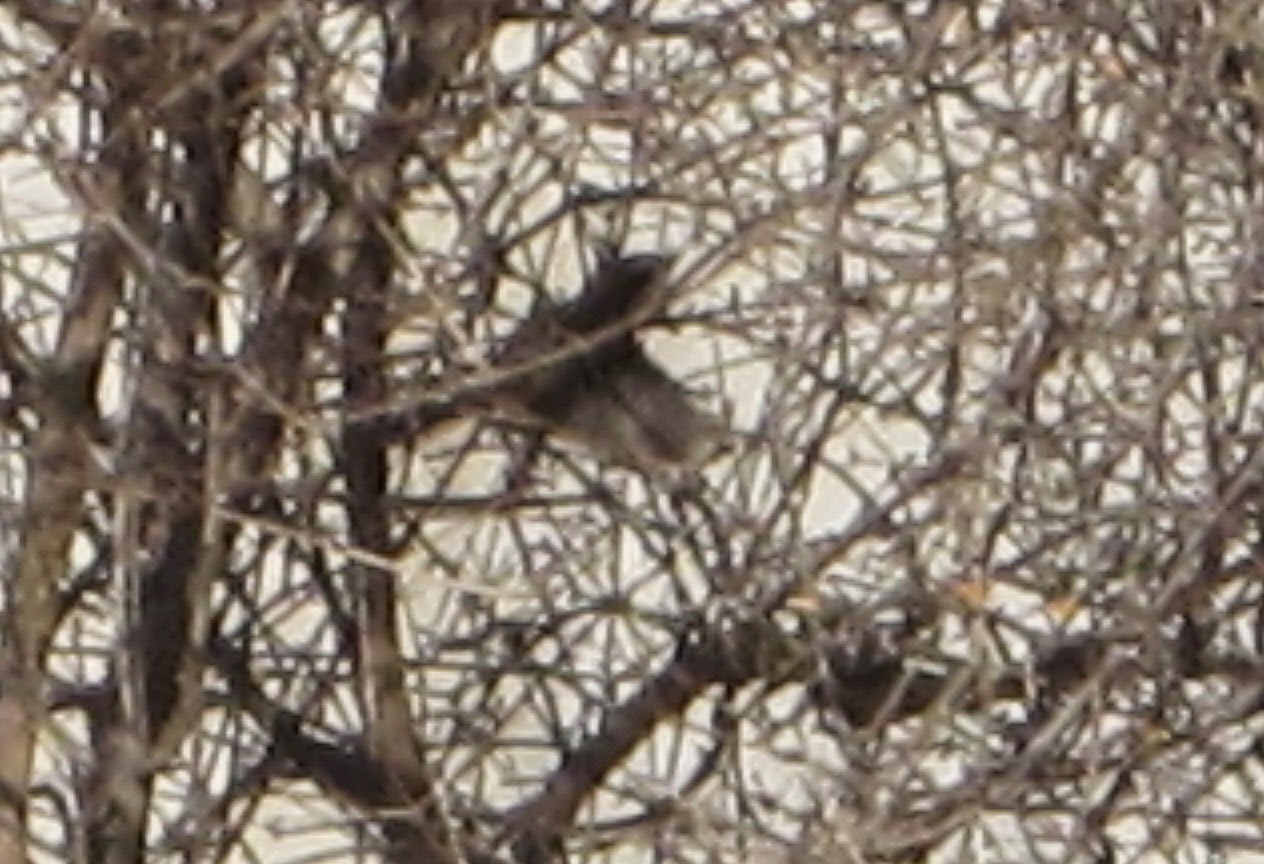 The fact that there had been an overwintering Isabelline Shrike Lanius isabellinus only 132 km to the S of the place where the Brown Shrike had been seen was kept in mind by Ricard Gutiérrez who, in company of Sergi Sales, decided to have a further look (they both had been there before without luck in early January 2015) on the afternoon of 9.2.2015. If the Isabelline had remained in Almenara all these months, why the Brown could not be there? ...

And much to the surprise of Ricard the bird, yes, the bird, was perched at mid height of a tree by the river Ebre promenade just where it had been found by Iain in January. 40 days after its finding, the bird had been there without anyone having the luck of watching it. After some running, Sergi reached the bird and both of us saw the bird and aged it as a 1w according to plumage characteristics, despite no photos could be taken.

During the following days a number of birdwatchers saw intermitently the bird and was eventually well photographed and even featured in the catalan television news. Further information in the Rarebirdspain website.

This is the 1st record for Catalonia and Spain.

On 6.7.2019 a brown and white gannet was seen off Arnao, Asturias (Saúl Rodríguez).  See two photos below. The bird was initially identified as a Brown Booby (Sula leucogaster) mostly on the basis of the face pattern and overall black and brown plumage.

On 9.7 Daniel López Velasco, after being contacted by Jorge Valella who initially realised the bird was not a Brown Booby, confirmed that the photos of the bird and initial thoughts of Jorge were right so the bird was indeed a 1st summer Northern Gannet (Morus bassanus).

Features pointing towards Morus were:


Arnao photos were not taken close enough and face pattern strongly recalled that of Sula leucogaster but a better analysis of the bird shows worn feathers and a face pattern that could be caused by moulted feathers into white, therefore matching at distance the l…
Leer más 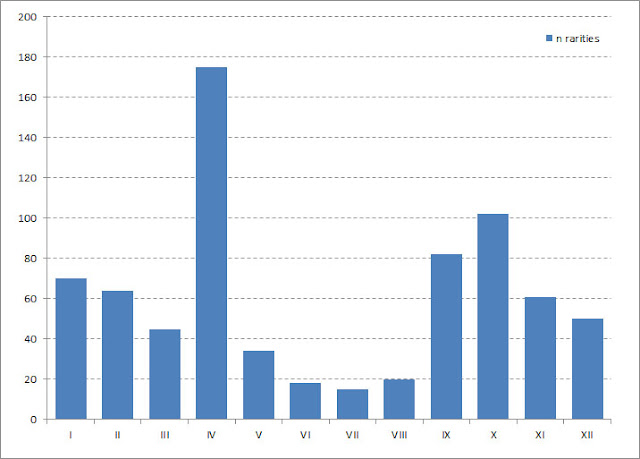 This is the 10th in-a-row Rarest of the rare bird in Spain contest!. It includes some of the 2019 birding highlights in the country.

A selection of some of the top rarest sightings obtained in Spain during 2019 and chosen by the webmaster of Rarebirdspain.net according to scarcity or singularity of the records are presented below.