Rarest birds of the year 2010 in Spain

Is this a Collared or a Pied Flycatcher? [¿Es esto un papamoscas collarino o un cerrojillo?]

© Juan Antonio Pulido On 3.12.2010 a 1w Flycatcher was was seen at Pedroñeras, Cuenca (Juan Antonio Pulido). Photos were sent to Rafa Torralba and from him to Rarebirdspain. The bird looked like a 1w because of moult of greater coverts. Characters pointing to Collared Flycatcher are the rather grey overall tone, the long primary projection, the rather pale collar, the white on the basis of primaries and the extent of white in the outermost tail feather. © Juan Antonio Pulido However, some authors think it may be a difficult bird and Sergi Sales has pointed towards a photo collage published in May 2008 Rarebirdspain page showing some variation in both Collared and Pied Flycatchers. © Álvaro Díaz 4.5.2008 The question is that the Cuenca bird, despite having long wings, has a rather small white patch in primaries, it looks greyer or no depending on the author (and computer?) and some inner primaries of the Cuenca bird may reflect a plumage aberration. Any opinions? In any
Leer más By mid-late November 2010, both species of 'commoner' Phalaropes: Red-necked ( Phalaropus lobatus ) and Grey ( Phalaropus fulicarius ) have been recorded in coastal wetlands of Murcia, E Spain. While Red-necked is considered a national rarity because of the paucity of records and the still not well documented status of occurrence (albeit it's a non problematic species in terms of identification), Grey Phalarope it is not. This is because of its regular occurrence in the Atlantic but, and this is the interesting case here, it's very rare in Mediterranean Spain. Indeed, thes could be the 1st for Murcia. Hence, the opportunity of watching both of them in a single day it's something to be considered. Thanks to Richard Howard who regularly contributes to Rare Birds in Spain with sightings from the region, as well as other local birders do, we include here two photos and two videos depicting these nice waders. More Red-necked information in the website here . All in a
Leer más

The 25th official report of rare birds seen in Spain is due for publication in Ardeola journal volume 57(2) of 2010. It contains 28 colour photos of rarities sent by the authors to rarezas@seo.org to become part of the archive of accepted rarities records in Spain. Have you been to Spain? Did you see rarities? Drop us a message, thanks! The report abstract is enclosed below. SUMMARY.—Report on rare birds in Spain 2008. This is the 25th annual report of the Spanish rarities committee ( Comité de Rarezas de SEO/BirdLife ). Up to 294 new accepted records from 89 rare bird taxa are given (acceptance rate of 84%). Additions to the Spanish List were the first observation assigned to the species pair Zino’s/Fea’s petrel Pterodroma madeira/feae , the first Steppe Eagle Aquila nipalensis , Arctic Warbler Phylloscopus borealis and Kumlien's gull Larus glaucoides of the nearctic race kumlieni . It has also been a first record for Spain the observation of an Egyptian Plover Pluvianus aeg
Leer más

Photo above:© Toni Alcocer 13.9.2010 An influx of Buff-breasted Sandpipers ( Tryngites subruficollis ) took place in Spain in September-October 2010. About 18 different birds were reported in September 2010 and 7 additional new individuals in October 2010. In comparison, De Juana (2006) gives only 28 accepted records up to 2004 in the whole of the country and 43 up to 2007 (Mainland and Balearics: 35 records/39 individuals; Canary Islands: 7 records/7 individuals; Dies et al 2009 Ardeola 56(2):309-344). Hence the 25 birds reported so far in Spain this Autumn 2010 is a notable number (40 reported in UK & Ireland in September as a comparison, Source: Birding World). Unlike the proportion of records shown in De Juana (2006) with a larger number of records in Galicia compared to E Spain and a lack of records from central Spain, the distribution of Autumn 2010 records seem to show a 'wave' moving N to South and crossing all over Spain, perhaps after having reached Europe
Leer más 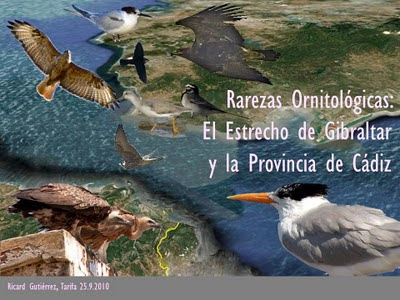