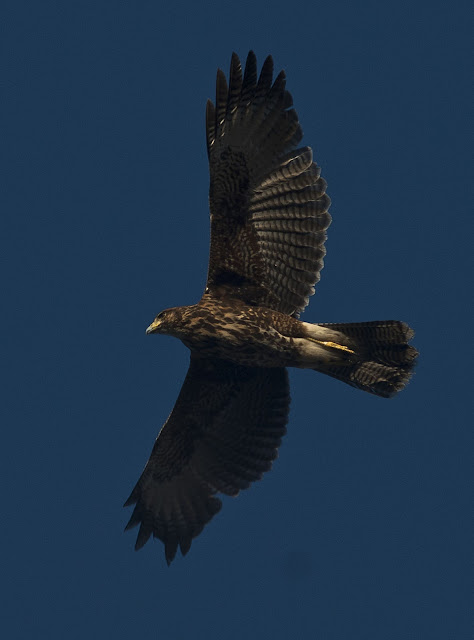 On 16:30 hours of 13th November 2012, Todor Todorov was having a tea with his boss. He nevertheless spotted a raptor in the distance. It seemed a Buzzard. To his surprise, the raptor headed directly towards them, perhaps unable to spot both humans shaded by a tree and canvas. A couple of  Kestrels ( Falco tinnunculus ) attacked the raptor and Todor could quickly mount his camera to take the above shot before the raptor left the area. That happened at Mijas Costa, Málaga, close to the Calaburras lighthouse. After some initial surprise, the bird was identified with the collaboration of more people as a juvenile Harris' Hawk Parabuteo unicinctus , a species of American origin unlikely to have been recorded in the wild in the area as it is commonly kept as a falconry species. Some individuals of this species have been seen in the wild in Spain and it's in the E3 list of the birds of Spain. However to our knowledge this is the 1st juvenile reported. The bird might be confus
Leer más
Más entradas