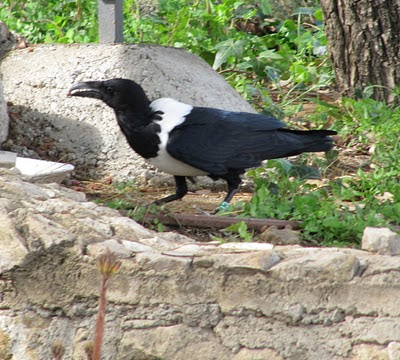 © Léa Beligné, Tarragona, 4.3.2011 On 4.3.2011 Léa Beligné, a SEO/BirdLife volunteer from Riet Vell reserve, Delta de l’Ebre, visited Tarragona city and found a large white and black raven close to the roman amphiteater. The bird could be approached and some photos were taken, two of which are enclosed here. The bird was in good shape and was carrying a green PVC ring with letters ‘CY’ on its left leg. Once shown these pictures to Josep Tantull, Roser Solé and RG at Riet Vell on 9.3 the bird was immediately identified as a Pied Crow ( Corvus albus ), a species that has been recorded before in other places of Spain. Being close to the Tarragona harbour, the possibility of a ship-assistance arrival was a possibility to take into account, despite the ‘odd’ pvc ring that did not appear in any ringing webpage neither European or African. Contact was quickly made with Albert Cama, the Tarragona birdwatcher, who lives close to the sighting area. That very morning the loud and harsh call
Leer más
Más entradas